A Look at Kata Application

If we look at this photo of Miyagi Sensei observing his students at practice you can see they are doing kata applications. 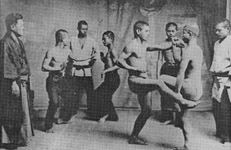 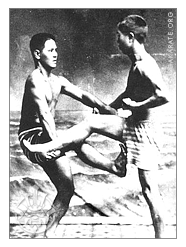 Most interesting for this makes a statement on what Okinawan kata applications meant, for this application is from the kata Seienchin (Seiunchin). In 1934 Mabuni Kenwa documented this in his book on Sanchin and Seiunchin kata.  Mabuni was a student of Itosu Anko, Higaonna Kanryo and a friend of Miyagi Chojun. As his senior, Funakoshi Ginchin, had already written on the Itosu lineage arts he began his own works on the Naha side of his teacher Hiagonna and friend Miyagi.

This shows us something interesting, for the kata Seienchin (Seiuchin) contains no kicks. On the
applcation there is most definately a kich shown, and to a most specific point, not the groin, but a close relative. 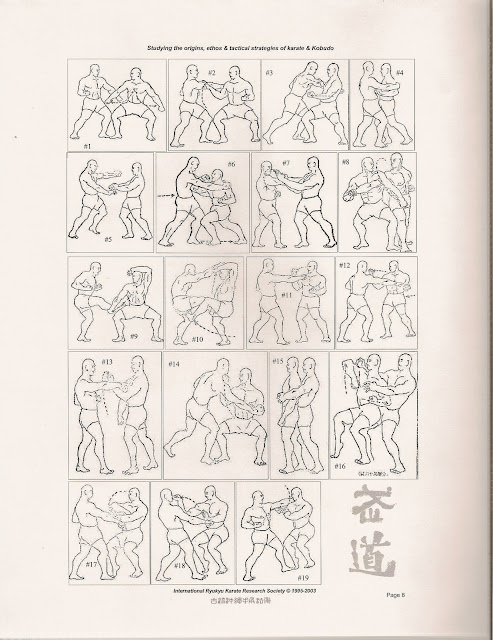 From my translation of diagrims 9 and 10

When the opponent kicks to your stomach, you step back to the rear with your left foot and parry in harai tori, shown in bunkai diagram 9-1, then you catch his foot.

And if in this position, the opponent attacks towards your face, and you parry with a high block, and catch his wrist with your left hand.

Next you give him a left kick to the groin.

As my translation was not for the complete book, I consider Mario McKenna's translation worth acquiring as he was able to translate from the original.
http://www.lulu.com/shop/kenwa-mabuni/karate-kenpo-the-art-of-self-defense/paperback/product-15747581.html

is that the use of kata technique might also contain extra techniques. These would be taught aat the descretion of the instructor, and logical analysis of the kata would not reveal their presence. Though logical analysis has a lot to say for itself.

Most interesting as an aside, Mabuni's text was I believe the first to use the term 'bunkai' which privately Mario Mckenna translated for me as "Mabuni uses the term "bunkai setsumei" or "breakdown/apart and explanation". which is somewhat different from how I believe it came to be used around the world. The Okinawan's did not use the term 'bunkai' but a friend who studies the Okinawan language has another term for the term. As I am not Okinawan nor did Mr. Lewis or Mr. Murray use the term from theit time on Okinawa,I use application. I do not have permission to use the Okinawan term and also choose not to share it as I don't wish to have instant experts citing me. I do study bunkai in my training with Tristan Sutrisno and his family version of Shotokan but their use of 'bunkai'' is beyond the boundries as other's use the term.

I hope this offers some clarification on this application
Posted by Victor Smith at 2:09 PM