A Glimpse at Bubushi Escape Techniques 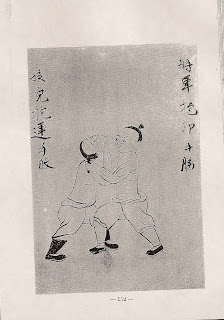 
It seems a long time ago now I began to look at the Okinawan Bubishi, its translations and possibilities of meaning to its text. I always found its existence interesting, but I also came to the conclusion it is almost universally ignored when it comes to training practice.

Of course almost none of us can hope to read/translate the original text. That leaves us to deal with specific translations. It’s practices may or may not be reflected in our own studies. Sure the Big ‘8’ for Isshinryu came from there, but which version?

I’m going to take a little time to look at one section of the ‘Bubishi’, Methods of Escape. My source will be the recent translation of Funakoshi Ginchin’s ‘Karate Jutsu’, translated by John Teramoto.

My reason was Funakoshi was first to share the Bubishi’s existence to outsiders, and he included this material both in his original book and later in his Karate Do Koyan, but left it in the original Chinese. One wonders if the emergent JKA from Funakoshi Sensei’s teachings ever paid attention to what was shared?

This section is an obvious reference to the use of diversion. If your enemy is looking to the east they may not be checking out the west, leaving them vulnerable.

I attended a seminar by a senior Judo-ka, long ago. He presented a technique his Japanese instructors waited 20 years to show him, but he didn’t keep the same restriction. While grappling, he would use both hand to really pull the opponent downward to the right.

The opponent would automatically counter pull to the left, and then he fell backwards throwing them over his left shoulder. First East then West.

I interpret this as inching forward on your opponent. Keep your front foot stable as your rear foot inches forward. That means you have to cover less distance when you stamp forward and can do so more quickly.

Kata leads us to standardize our technique, but when facing an opponent subtle shifts and deceptive openings to set up our response are useful, even if not formally seen in the kata.

Of course I may be assuming too much, such that the stamp is with the back foot, it may be the front foot. In that case sliding the rear foot forward actually places your center closer to the attacker allowing the front foot to reach in further.

What does stamp mean? Is it a cross stomp kick?. Stamp might be interpreted just as is says, a stamp to the instep of their foot. Trying to break it and paste them to the floor. That stamp may be accompanied with upper body technique done at the same time, and becomes a force multiplier among other uses.

Even more simply, the stamp might be nothing but a big owie, creating a distraction to escape (keeping with the section title.

Keeping your body rigid inhibits your ability to rotate, slows you down and decreases the power that can be emitted from the technique. A great example are the turning techniques in Naifanchi Kata. Keeping the torso soft allows quicker rotation.

Rotation is much more subtle than the large turns. It also involves the smaller turns used in technique movement. An example are the rotations of the knee during knee release to move a technique into the optimal zone of entry to an attack Reinforcing that soft becomes hard.

Interesting choice of words, intensify the soft power? Sounds like a contradiction doesn’t it.

Several time’s I’ve been shown how to press both hands on the hand grabbing your hair to neutralize their grab, but putting your hand into their throat works for me Thumb attacks seem too complex when your head is being jerked around, imo.

Again sound advice on how to strike. I was shown no matter where you face an opponent find the centerline of their body and strike towards it. At times trunk rotation can spin off attacks to the bodies outsides, but the center line as a target remains true. You also have a great many targets of opportunity on the centerline.

A common approach in many arts is that an attack isn’t countered until the opponent is immobilized on the ground. Face down, kneeling on their arm is a good way to conclude their attack. One of the Sutrisno Aikido concepts is as the individual is going down, utilizing a wrist lock to roll the opponent into that position no matter which way they originally fall.

There are so many variations of the lower body combinations. The one I began with included kicking from the ground with front thrust kicks and side thrust kicks. If you’ve been downed, they have to reach down to get you, and if they didn’t ride you down to remain in control, their inexperience can be used to counter them.

Note there is a principle here. The throat is extremely unprotected.

An opponent who is using defeat to punish is making a amateur mistake. If they were professional they would just finish you off. If they haven’t their hubris might be used against them, and the action described might well leave their throat open for attack.

One wonders if the addition of elbow/forearm strikes in Wansu and SunNuSu were specifically added for this reason.

The reach of the leg being a deciding factor to use the kick. Note the use of stamping, as if the use of the kick is to immobolize the opponent. It really reminds me of the kick being used in the To’on Ryu Seisan Kata. A whole body leg stamp, very different from any other style.

I presume this is tactical thinking. If your opponent is on your right, lowering your right arm might be an invitation for them to attack a perceived weakness. In turn you create that weakness to counter that attack. More a tactical theory than a tactical lesson.

This is similar to the concept shown to me in our version of Wansu. In this case the spear hand would appear to be too short for a scoring stroke, but a following leg underneath the arm has a much longer reach if they go to attack against the spear hand.

I think this might be interpreted in the sense where the knee points the foot follows. So to kick higher the higher you first raise your knee, the higher the foot will go.

This is advice how to counter a grab. Grab’s work when they are applied in a very specific angle of attack. Often bending the elbow will remove that line of attack, allowing further counters.

I would suggest a counter fingertip strike to the throat against an arm grab.

I see this as interpreting the swagger as a sign an attack is coming. Professionals work not to give out signs, so there is less chance of counter.

I find this most interesting. This is the crux of the alignment theory we follow, to increase the power of our techniques, to give no sign of weakness for the opponent to support. This doesn’t just apply to the hands and the stance, it covers the entire range of motion potential. Even the eyes looking in the wrong direction affect a correct technique.

I don’t find this a surprise. My own understanding arose from my tai chi studies and then was applied to my Isshinryu. But the secret is just doing Isshinryu 100% correctly every time.

Each imperfection decreases from your power. Kata then becomes the most important tool to help craft our shape in response. But it still is just a tool and other tools are required, that and never ending work.

So some sound tactical theories, IMO, from the Bubishi.